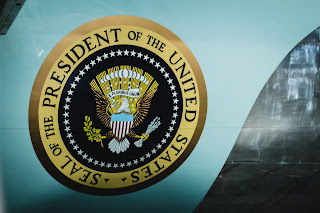 It's the end of another year, and of course that means everybody is publishing "lists". So, here is our ranking of the Top Five Presidents of The United States. The list tries to avoid any obvious partisan bias—and merely looks at the objective achievements of each on the evolution of the country that we know today. So, here we go:

1.) George Washington. I know, pretty obvious. But Washington's contributions really were legion. For example, he set the template (literally) for how Chief Executives would operate after him. He also presided over the establishment of the new federal government (after the failure of the Articles of Confederation) and committed to a permanent site for the capital. But without a doubt his lasting contribution was his decision to seek only two terms. His popularity would likely have given him the presidency for life—but he chose to step aside and avoid any semblance of "royalty" in the new American polity.

2.)  Abraham Lincoln.  There's a lot of idle talk these days about "existential crises". President Abraham Lincoln faced a true existential crisis—the dissolution of the United States through southern rebellion. While he pushed the envelope on assuming extreme presidential powers, he succeeded in leading a fractured nation trough a gruesome war—and ended slavery in the process. Moreover, he did not subjugate the defeated rebellious states—but welcomed them back to the Union. That gesture of statesmanship was critical in healing the country's wounds. For all of that, he paid with his life.

3.) Harry S Truman. The man with only a letter for a middle "name" assumed the presidency upon the death of FDR—in the middle of an unfinished war. Few thought he had the stature to lead the nation in such dangerous times. He proved everyone wrong. In the process, he had to make what is probably the most consequential and difficult decision by any American President before or since—the use of atomic weapons. It was a decision with no good options—a.) invade the Japanese homeland and sacrifice hundreds of thousands more Americans and Japanese or; b.) use the most horrific weapon in human history on civilian populations. He chose the latter and ended the most savage war ever experienced by humanity. After the war, he then led America in the early stages of the Cold War with the Soviet Union. Part of that effort was the establishment of the Marshall Plan to revitalize a devastated Europe.

4.) Franklin Delano Roosevelt. FDR's visionary leadership pulled America out of The Great Depression with bold initiatives that literally saved millions of lives. Many thought America was on the verge of revolution—but the New Deal kept our institutions and our democracy in place. He also recognized the threat of fascism in Europe and Asia—and rallied a reluctant nation to eventually enter the fray of World War II. As Commander in Chief, he authorized the strategies that eventually brought Nazi Germany to its knees.

5.) Dwight David Eisenhower. After winning World War II in the military role of Supreme Allied Commander, Eisenhower assumed the Presidency in a delicate period of American history. The postwar environment plunged the United States into world leadership on a number of fronts—economic, political and social. Ike deftly moved us into that leadership role—while overseeing the wildly growing American economy of the 1950s. But what may be his biggest achievement was the commitment to establish an interstate highway system that was worthy of a great power. His vision was for an all-highway system with national standards for construction and signage. Today, about one-quarter of all vehicle miles are driven on the Interstate Highway System. The impact on commerce, economic development and simple freedom of travel cannot be overstated.

So there they are—our five greatest American Presidents.