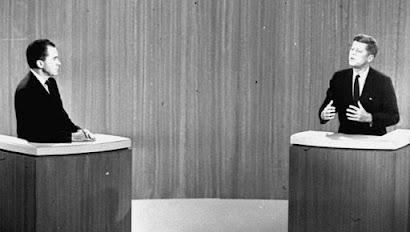 In 1960, Massachusetts Senator John Kennedy was widely considered to have defeated Vice-President Richard Nixon in the first-ever televised presidential debate. That is, of course, unless you listened to the debate on radio—in which case you considered Nixon the victor. The visual power of television and its ability to shape a candidate's image are unquestioned. But, do presidential debates really have an electoral impact on a race—or are they just political theatre? And will debates matter more in this highly unusual 2020 election cycle?

Most research indicates that debates have little or no impact on the eventual outcome of a race—they simply reinforce already existing partisan positions. Sure, we all remember the "gaffes": Gerald Ford 'freeing' Eastern Europe from Soviet Russia's domination, George H.W. Bush constantly glancing at his watch in the 1992 debates, and Al Gore audibly sighing during his 2000 debate with George W. Bush. And, how about "winners" and "losers" in debates? In 2016, post-debate polls indicated that Hillary Clinton clearly defeated newcomer Donald Trump in their first encounter. But, by the time the last debate rolled around in late October (during which Trump labelled Clinton a "nasty woman"), the race had changed. Debates were just one piece of the electoral puzzle. Other factors—far more consequential than debate performances—ultimately had an impact on the outcome in 2016.

So what of the 2020 debates? It's tempting to just assume that the upcoming head-to-heads between former Vice President Joe Biden and President Trump will follow historical patterns and also be non-consequential. But clearly, the 2020 political landscape is like nothing we've ever seen before. Other, more traditional modes of voter communications—raucous conventions, rallies, face-to-face dinners and fund-raisers—just aren't in the cards this year.

Thus, campaign communications unaffected by COVID-19—like television advertising and the three debates—are likely to be disproportionally impactful. There will be no loud audience reactions to any debate gaffes (which can reinforce their impact), but voters are smarter than many pundits give them credit for. And, in this bizarre year, it's probably wise to assume that old patterns will not hold. The information cues that voters pick up in the Biden-Trump debate confrontations might just go a long way toward determining their final choice.