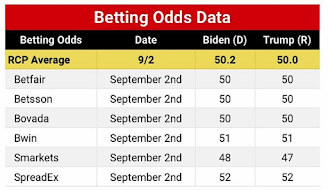 As of today (September 2, 2020), most of the world's major betting houses (we used to call them bookies) place the 2020 U.S. Presidential race in a dead heat—with Joe Biden a smidgen ahead. This is in contrast to the most recent scientific polls—the average of which put the former Vice President at least seven points ahead.

In 2016, the odds-making prognosticators had "President" Hillary Clinton on her way to an historic victory. The bottom line is: beware of election "models"—be they from bookies or even more "sophisticated" sources. Speaking of one of those other sources, the 2016 New York Times model predicted—on Election Day—that Clinton had an 85% chance to win. The embarrassingly infamous Times quote was, "Mrs. Clinton’s chance of losing is about the same as the probability that an N.F.L. kicker misses a 37-yard field goal." Apparently, they'd never heard of Scott Norwood (see Super Bowl XXV).

A more reliable way to follow the actual flow of the race is to look at key battleground polls in states like Michigan, Pennsylvania and Wisconsin. Of course, this has its pitfalls as well. In 2016, Donald Trump outperformed statewide polls in those states by an average of 5.2 points. Samples that underrepresented non-college-educated white voters are generally regarded as the reason for the failure of those polls. Still, it's in these key states—along with Arizona, Ohio and North Carolina this year—that the race will likely be determined. As with 2016, the winner could once again lose the popular vote and eek out victory in the Electoral College. In any event, this is shaping up to be a very close race—that you can bet on.