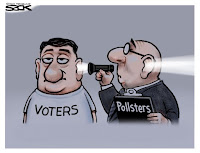 As the polling industry struggles through the media equivalent of The Spanish Inquisition, there are indications that some pollsters garnered quite accurate assessments of 2020 voter intent by asking a particular election question. It was not the standard "If the election were held today, for whom would you vote?" query—which, in general, showed a much larger Democratic advantage both nationally and in many key swing states. Instead, it was some variant of the following question:

Among all your family, friends and social contacts that are likely to vote, what percentage do you think will vote for [Biden/Trump/other candidate]?

Nationally, while the 'standard' election question garnered a Democratic advantage of 8%-10% (landslide territory), the "friends and family/social circle" version was much closer to the actual vote (3.7%-5%). Research from the University of Southern California Dornsife Daybreak Poll shows that the national "social circle" question—and a companion to predict state winners—was demonstrably more accurate than the election question measuring a voter's own intentions:

At Polity Research, we have found the "social circle" question to be a far better predictor of election outcomes—along with a series of questions we've developed to measure respondent comfort on things like sharing voting information to pollsters (the 'shy voter' phenomenon). Our composite index of these questions is the Respondent Comfort Index (RCI). As the polling industry moves forward, we will need continuing adaptation of our techniques to be certain that we capture the full electoral landscape—and not just a collection of single voter intentions.