The Six States To Watch On Election Night 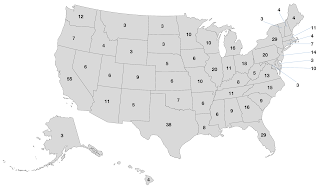 Despite what you've heard, Tuesday night will not feature a national election. Instead, it will be a collection of 50 state elections (plus D.C.)—that feed into the Electoral College. So, the "national" tally board is meaningless. To determine the winner, you need to track the results of a few key states. This time around, there are a bunch of states that are close enough to be determinative. However, it's shaping up to be about six that will hold the key to whether Donald Trump or Joe Biden get the requisite 270 electoral votes to claim victory. "Claim", of course, may be the operative phrase of the 2020 campaign. Conceivably, the outcome could be contested by either campaign—but let's not go into that potential mess right now.

Now for the speculation. As things stand now, we would expect both Florida and Texas to go to Trump—although that is not a dead-lock certainty (what is these days?). North Carolina may flip to blue, but it seems that Georgia will stay in the Republican column. Again, no guarantees on either. So, the race seems to actually be coming down to two states: Pennsylvania and Arizona. Both campaigns have been spending time and resources in the Keystone State in the final days, while Arizona hasn't really gotten the attention it deserves. The most recent polls have Biden up in both states—but only by around three points in Pennsylvania and one in Arizona. Clearly, they are both up-for-grabs. All other things being equal, if either candidate can capture both on Tuesday, that person will likely win it all.

Because of varying deadlines for counting early ballots, we may not know the results in some of these six states for quite a while after Tuesday night. So, fasten your seat belts.