The Hartford Convention And Our (Almost) First Civil War 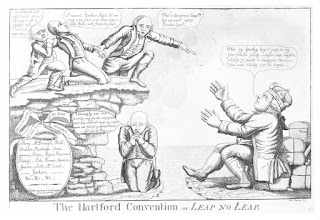 Lately, there have been a lot of references to the American Civil War—from both the Left and the Right. Most of it has been a hyperbolic attempt to equate the current divisions in our society (which are clearly real) to that cathartic chapter in our country's past. All this talk has reminded us of what was the first potential rift in the fabric of the American polity: The Hartford Convention.

In fact, it wasn't a rebellious band of Southern Confederates that first threatened the Union—it was a gaggle of New England Yankees. Upset at the course of the War of 1812—mostly because it disrupted profitable commerce with Britain—Federalist Party firebrands used the Hartford Convention to air a flurry of "demands" on what they perceived to be an oppressive federal government ruled by the Democratic-Republican Party. Meanwhile, British forces—freed from their pre-occupation with Napoleon—were ravaging America. They burned the White House and the Capitol building and were rapidly advancing their territorial gains in Maine and elsewhere. Some of the more radical secessionists at the convention actually proposed making a 'separate peace' with Britain.

Some of their proposed constitutional amendments at the 1815 convention were intriguing—like limiting Presidents to one term and requiring each president to be from a different state than his predecessor (a not-so-subtle slap at Virginia). But their most controversial idea was the secession of the New England states from the Union. Most historians believe that this was mostly a rhetorical threat—and, in fact, the final convention report did not call for secession.

But the mere airing of secessionist rhetoric gave credence to a radical idea: that 'injured' regions could "opt-out" of the federal union. This idea would rear its head again—in a far more destructive fashion—just 45 years after the Hartford Convention in the actual Civil War.