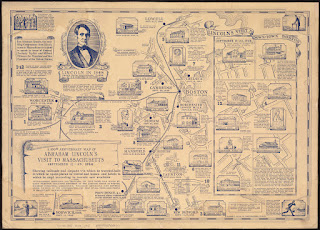 In 1848, a 39-year-old congressman from Illinois made a barnstorming trip through Massachusetts for his party—the Whigs. The tall, lanky Abraham Lincoln was trying to drum up support for the Whig presidential ticket of Zachary Taylor and Millard Fillmore. He was a tireless speaker—making appearances in Worcester, New Bedford, Taunton, Mansfield, Dedham, Lowell, Cambridge, Chelsea, and Boston. It was a busy schedule. At one point, he told the crowd in Dedham, "I have kept my word to you to speak here, and I must do the same to the Cambridge people in the evening and must run for the cars."

Lincoln knew he was sowing his political seeds on fertile ground. Massachusetts voters were receptive to the Whig message as a counterpoint to the Democratic Party's southern sympathies. As he acknowledged to one crowd, "I address this audience with some trepidation, where everybody on this side of the mountain is supposed to be instructed and wise."

The young man from Illinois was a huge success on his trek through the Bay State. In fact, the Taylor-Fillmore ticket won Massachusetts and its 12 Electoral College votes on the way to victory in November. The trip also gave Lincoln currency in the influential anti-slavery, abolitionist circles of the state. The Whig Party would eventually dissolve and be re-born as the Republican Party—which Lincoln led to victory 12 years later in 1860. His early form of "networking" on his Massachusetts tour undoubtedly helped secure his political success.