The Roots Of America's New Crisis In Confidence 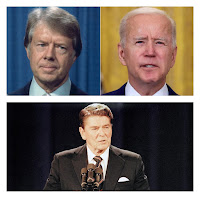 Forty-three years ago (July 15th, 1979), President Jimmy Carter addressed the nation about what he termed a "moral and spiritual crisis" facing the American people. As is the case now, gas prices were soaring and the nation seemed to be stuck in a "malaise"—with no end in sight. As a young researcher at the President's polling firm (Cambridge Survey Research), I was well aware of the sour mood in the country.

Recently, the polling firm Ipsos released a survey of 1,019 Americans and tested some of themes in Carter's speech. Remarkably, several of these still resonate well—including: "The erosion of our confidence in the future is threatening the social and political fabric of America".

But a far more salient result is buried a little deeper in the survey results. Fully 60% of Americans today either 'strongly' or 'somewhat' agree with the following statement by another president, Ronald Reagan: "In this present crisis, government is not the solution to our problem, government is the problem". Just 16% disagree to any degree with this notion. Leaders of both parties need to pay heed to this deep level of mistrust with the value of government action.

A little over a year after Jimmy Carter's speech, Ronald Reagan swept into the White House with a landslide victory in 1980. In this new 'crisis in confidence', President Joe Biden needs to figure out how to deal with this lack of faith in government, for his own sake, his party's and—most importantly—for the nation.