Would A Proportional Electoral College System Have Worked? 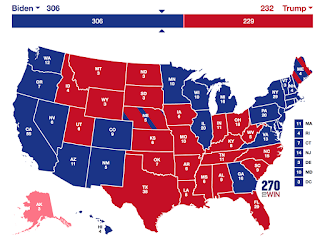 Amid all the calls for the abolition of the Electoral College, one inconvenient fact emerged in 2020—it worked again. The popular vote winner also won a majority of electoral votes—as has happened in the vast majority of presidential elections since 1788. Having said that, a small reform of the system would make it even more representative of the people's will. Making the allocation of each state's electoral votes proportional instead of 'winner-take-all' would have delivered a result that almost exactly matches how people voted.

The proportional Electoral College approach is clearly a much better reflection of the closeness of this year's race than what the current 'winner-take-all system' will eventually show. This one simple change—an approach already taken by both Maine and Nebraska—would improve electoral representativeness and avoid the need to go to a popular vote system.